Marketers just go nuts over April Fool’s. I get it – having a way to change up your content and possibly even gain social media attention is very welcome when you’re running out of things to say about spring and not ready to start promoting summer. But there’s a fine line between being funny or clever and trying too hard. “Official” April Fool’s jokes by brands have gotten so popular that they’re practically expected. Brands that aren’t doing an April Fool’s campaign tend to go the opposite route and don’t release actual products on these days for fear that they’ll get lost in the prank messaging (or worse, their product may be seen as a prank itself!).

Litmus did a nice roundup of this year’s April Fool’s emails. Here are a few others I received:

1. Murray’s Cheese (why yes, I do subscribe to emails about cheese. Don’t you?)

Murray’s is a gourmet cheese shop in NYC. In addition to selling delicious cheeses, they also offer classes on MAKING cheese.

I thought this email was great – it had a pun in the subject line (always a win for me!), and the joke was funny, relevant to their product, and very obviously a joke. I saw a lot of others this year that weren’t so obvious.

Subject Line: Murray’s Cheese: To the Milky Whey and Beyond! 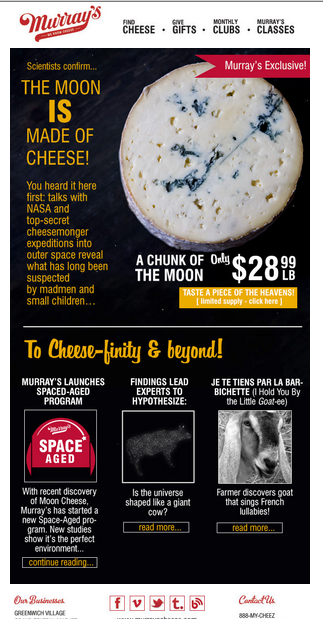 What I liked about this email was that it was so on-brand for Old Navy that it wasn’t immediately clear that it even was an April Fool’s email. I get a LOT of emails from Old Navy, and rarely shop there. Until I started this blog, I didn’t really pay much attention to most emails from Old Navy (or really, any brand that sends emails about clothes daily).

This email took a different approach than most brands do for April Fool’s – it took an existing, actual product and just marketed it in a fun and silly way: Action Star Jeans! The models were wearing fake mustaches, and the copy said things like “These jeans are so tough, they make onions cry.”  The price made it clear that this wasn’t a typical Old Navy email – $99.94 . The email featured a coupon and linked to their homepage, so it probably generated more revenue than social media buzz. (How many other April Fool’s emails can say that?).

I didn’t love the subject line – I’m not a fan of title case, and it had no indication that this might be a special/different email, so I feel like it really did a disservice to the creativity that was put into the rest of the email.

This email was just fun. Poppin sells cheerful, brightly colored office supplies. Their April Fool’s email featured a “Mood Pen” that changes colors with your mood so your co-workers can “know how you’re feeling without having to ask!” The pen image on the right was a gif that changed to all of the different colors they offer, and the left side listed possible emotions that your pen could show, and they were funny – hungover, smart-alecky, hangry.  Their company slogan is “Work happy,” and their primary brand color is orange, so naturally the orange mood was “Working happy.” I loved that this one was fun and playful, but still managed to showcase their brand and actual products (even though it was through a fake product).

The subject line was pretty straightforward, and just intriguing enough to get people to open the email to see if this was a real thing. 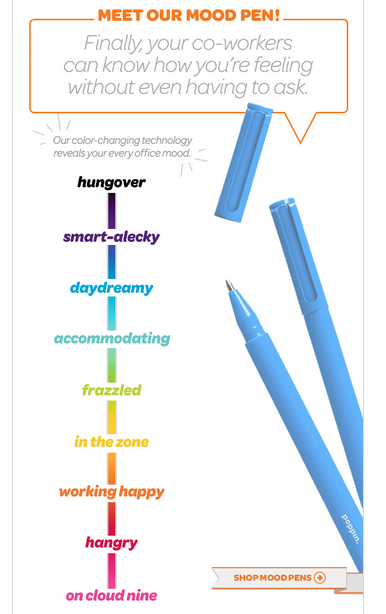 I think the takeaways here are that good April Fool’s emails should be on-brand, funny, and relevant to your actual product offerings. Sure, it’s funny to create a fake product that tricks people, but wouldn’t you rather have your subscribers see you as clever and creative?